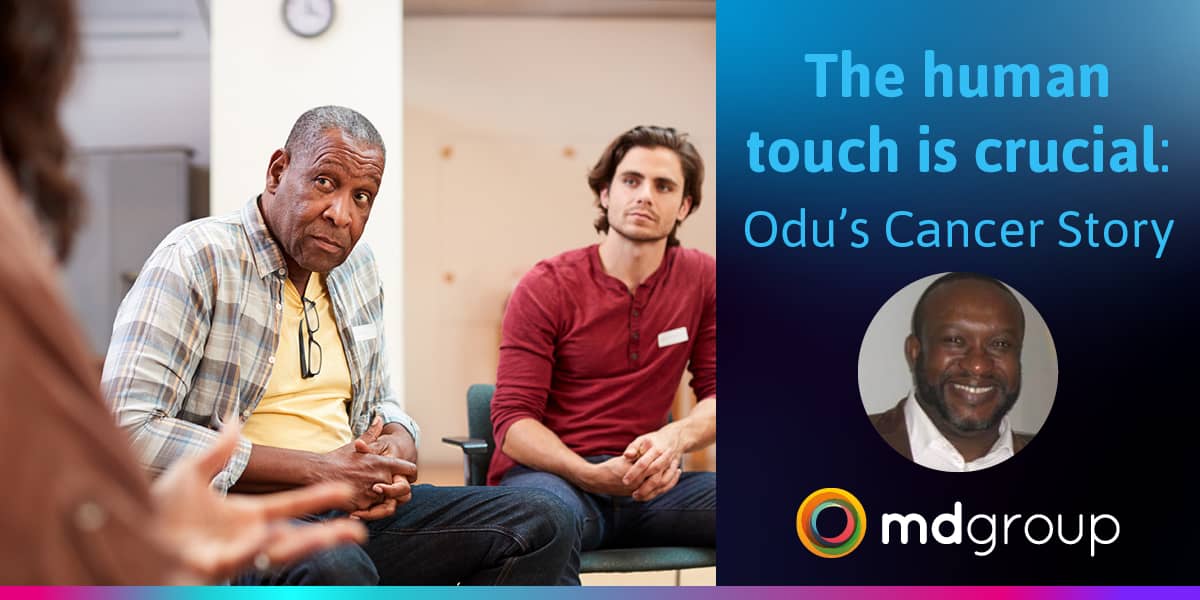 I’ve always been passionate about prioritising people and their needs. Having worked in the customer service industry prior to mdgroup, it’s become part of my nature. I believe in good service, going the extra mile and doing all you can to provide an exceptional experience.

In January, I was diagnosed with Non-Hodgkins Lymphoma and my world flipped upside down. I went from helping patients as part of my role as an Account Manager at mdgroup, to being the patient. My experience has made me even more passionate about providing a service that truly serves the patient, their concerns and their families.

I was first hospitalised with pain in my side, and the doctors ordered tests. A registrar came to see me and recommended surgery straight away. I had to ask where this was coming from, as I hadn’t been kept in the loop. The mention of surgery was a shock from hearing so little about the diagnostic process.

There were so many different levels of service from so many different people. The nurse that personally triaged me was very concerned, very methodical, and explained everything to me. The registrar was very brusque, abrupt and didn’t even look me in the eye.

They took blood tests and a biopsy, which took a couple of weeks to come back. A doctor I already knew chased it for me, and was the one who broke the news to me in January:

“You have B cell Lymphoma”.

The Power of Communication

Even when I went for my first biopsy, no one explained to me why they were doing it, or that they were checking to see if I had cancer.

After my diagnosis, there was no one to discuss it with and explain the process to us as a family. The health care practitioners do point you in the direction of Macmillan Cancer Support and people who can help, but it’s you doing the work to get the support you need, rather than them coming to you.

Maybe it’s because it was during COVID, and I had to go to appointments on my own, but that proactive support was missing. Patients need information and to understand what’s happening, and that just wasn’t there for us.

Lack of Diversity in Healthcare

I was assigned a cancer team with a lead cancer nurse. One of his parting comments to me was, “this will be very interesting. We’ve not treated an ethnic person with this cancer before.” I repeated the story to my friends, who were all shocked. Everyone I told agreed that the nurse shouldn’t have told me that.

I found it very difficult to voice how I felt. When I went for my chemo cycles, the nurses were very attentive to me. Yet in the times I was very ill and I had to ring the hotline, they could be very dismissive. I complained about it, and I felt dismissed there too.

There were definitely people that would rather not have been treating me. I can always tell if someone’s not happy treating or dealing with me because of the colour of my skin.

Diversity and listening to a variety of voices is something healthcare professionals need to pay attention to. The statistics of experiences of pregnant black women are a huge talking point right now. But until we take action, the numbers won’t change.

The Impact of Chemotherapy

I was put on CHOP Chemotherapy, which is the most severe level of chemotherapy you can have. It’s one of the oldest forms of chemo, but one of the best. I told a nurse friend of mine about it, and she said “Odu, it’s good, but it’s going to be tough.”

The biggest impact of my treatment has been fatigue. Fatigue is not just being very, very tired. Every muscle, every tendon protests. When it hits you, there’s no warning sign. It’s like you’ve been run over by a bulldozer, twice. Every movement is a struggle.

I’m part of one of the lymphoma support groups. I received their quarterly pamphlet magazine and there was an article on fatigue. Doctors don’t know how to treat it, so there’s no set criteria or plan for it. The only recommendations are rest, adjusting your diet and refraining from being overly active.

It’s frustrating because my plan for this year was to swim and play tennis as much as I could. I’ve only just started swimming because I’ve been shielding for so long. Chemotherapy obliterates your immune system, so my whole family has been shielding to protect me.

The Importance of Strong Support Systems

Throughout the process, I was fortunate to have some good support networks as well as the incredible support I received from the team at mdgroup. I had two groups I could jump into when I was feeling low, or I just needed support. One was my best friend group, which was made up of about twelve people. I’d message them about how I was feeling, or if I was struggling, and they’d help me through.

I’m also a member of a men’s group called The ManKind Project, a charity that helps men to establish and pursue their own life purpose and nurture their emotional well-being. I chose to buddy up with a few of the men I met there and with whom I have a great affinity. I’d speak to them once every fortnight, or the week after I’d had chemotherapy, and they would be my pick-me-up.

The Taboo Around Male Health

As a man, I have to own what’s happening with my body. I have no shame around that, if somebody wants to look at something, everything comes off.

My parents instilled that in me, as my mum was a nurse, and my dad was medically trained. I was always told not to take anything for granted when it came to my body. If there’s a change, you need to tell somebody.

My message to other men would be don’t have any fear. Doctors have seen everything once, twice, a thousand times. Even if they haven’t got the best people skills in the world, they’re the ones that are going to help you.

No man should hide behind being a man when there’s something wrong with their body. The outcome can be quite devastating if you leave things too late, or you don’t seek treatment.

I finished my treatment, and I went into remission. I was told I had metabolic obliteration, which meant there was no sign of cancer. If I’m fortunate enough, and I persevere, I will get some resemblance of my ‘normal’ self back.

I think there should be more support for how to deal with the aftermath. Chemo has killed everything in my body, it’s done the job that it needs to do, but I’m left with a completely different body. All my nails went black and fell out, and my hair fell out, too. Some of the side effects and changes just weren’t discussed with me.

Reflecting on my experience

If I was to go through it again, I would take what the medical team says and does with a pinch of salt. I abdicated all responsibility because they’re the experts. After my third cycle, they missed a massive blood clot. If it had moved quicker, I probably wouldn’t have made it. I’ve had no feedback or apology, it’s just in my file.

You have to be self-policing when it comes to your own health. Learn as much as you can, which I did, but I think my epiphany on that was a little bit later in my journey. I’d let a lot of things happen and a lot of decisions be made for me before realising I could have done things differently.

You just have to be ready to fight. It’s shown me that I have a strength I never thought I had. I’ve been through it and I walked down some very, very dark roads. I spent many a day in tears for no reason at all.

You have to fight your corner. Be a man by showing your fear, because the reactions of people will surprise you.

I’m now more proud than ever to be part of the team at mdgroup. They went above and beyond to support me throughout this entire experience, and I really don’t know where I’d be without such an incredible team around me.

What makes us different is we prioritise the human touch. We know how important it is. We always talk about the patient experience and think about the patient’s point of view in everything we do. That side of it comes easily for me. Learning the medical terminology and diseases we’re doing trials on just adds spice to what I do as a natural reaction.

One size doesn’t fit every patient. We have the white-glove service, and it’s crucial to consider if you were in that position, how would you like to be treated?

Posted | February 2, 2023
I was recently a guest on one of our mdtalks - our monthly podcast where we discuss the most critical issues impacting clinical research, the patient experience and the future…
Laura Oxtoby
Love0
Decentralised TrialsmdtalkPatient Experience