On a Mission to Change Public Perception of Parkinson’s: Alex Flynn and Justine Nunn’s Story 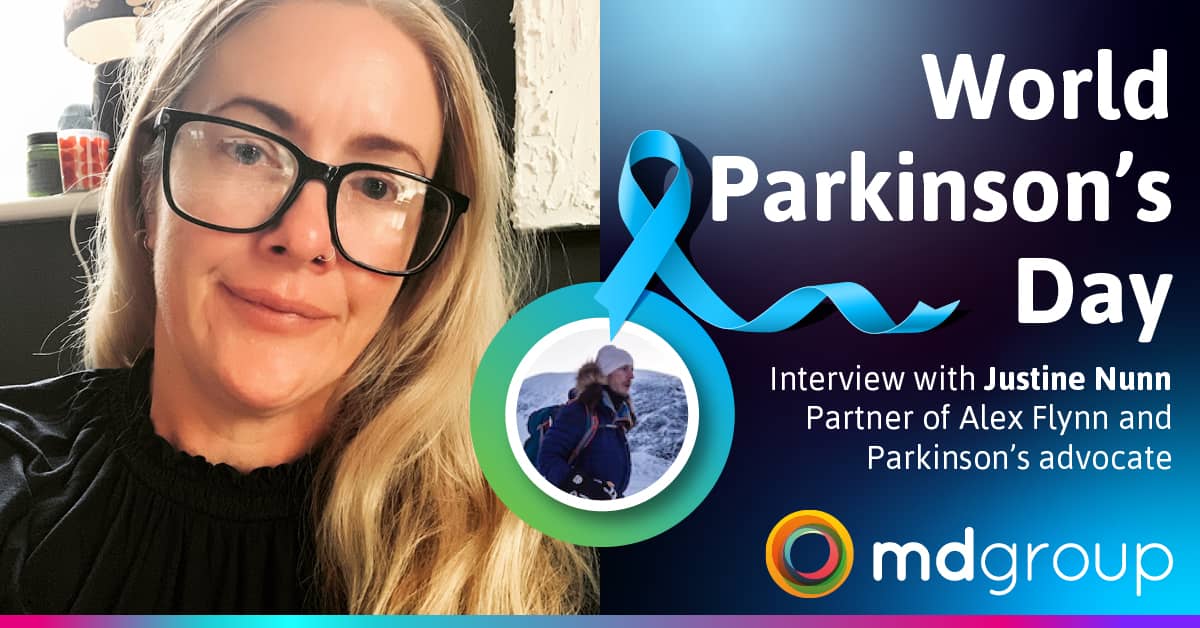 World Parkinson’s Day takes place on April 11th to raise awareness of the world’s fastest growing neurological disease. It is a cause very close to our hearts here at mdgroup.

Last year, we were honoured to support Alex Flynn, an adventurer on a mission to be the first person with Parkinson’s to climb Mount Everest. Alex was diagnosed at the age of 36, and we were in awe of his incredible ambition and determination to raise awareness and funding for the disease.

Alex sadly passed away from altitude sickness last year, while summiting Nepal’s Mera Peak aged 49. Those closest to him are continuing his mission to change public perception and advocate for greater awareness of the disease, which affects over 10 million people worldwide.

To mark Parkinson’s Day 2022, we spoke to Alex’s partner, Justine Nunn to learn more about the experience of living with Parkinson’s, and how she is ‘carrying the baton’ in Alex’s honour.

Alex Flynn was a successful lawyer, yet after his diagnosis he experienced huge stigma, which prevented him from finding paid work.

Justine told us: “That’s the sort of thing we’re hearing more and more about; when highly qualified and skilled people just get rejected because they have the disease.

“In Alex’s case, the rejection made him more determined to prove to the world that everybody should have the same rights to the basics in life. Parkinson’s shouldn’t be the end of someone’s career.”

Justine shared how she witnessed him taking on the ‘most incredible challenges known to man’, despite his disease. From running around the world to planning to climb Everest. However, there was more to his story than met the public eye.

“People saw this amazing, healthy, good looking guy who would do things highly fit people wouldn’t even consider. But behind closed doors, it’s a very, very different thing. He couldn’t get out of bed some days, couldn’t get dressed.”

Every hour, two people are diagnosed with Parkinson’s. Despite it affecting so many people worldwide, there is still little known about the disease and misinformation and stigma remains a huge barrier. One of the biggest misconceptions, Justine said, is that Parkinson’s is seen as an old person’s disease.

“This disease does not discriminate.”

Justine added, “Parkinson’s disease is not a killer. Alex didn’t die of the disease, he died of altitude sickness. We didn’t want people to see the news and think, ‘if he died from this, what chance do I have?’ This is not the case.”

When asked what can be done to raise awareness and further research for Parkinson’s, Justine said:

“It’s about breaking down those barriers. Parkinson’s is not the end. It changes people, of course. But with Alex, if he didn’t have the disease, he never would have had the incredible experiences he had. It’s not the end. People can live full lives.”

Here are just some of the extraordinary physical feats that Alex Flynn achieved to raise awareness of Parkinson’s disease:

Alex’s final challenge was “to put Parkinson’s on top of the world” — an ascent of Mount Everest at 8,849m. In preparation, he climbed Europe’s Mont Blanc at 4,809m, and followed it with Nepal’s Mera Peak at 6,476m. Having got to the summit of Mera, he descended to base camp but died of a heart attack due to altitude sickness.

So what’s next for Justine?

Alex was planning to participate in an extreme physical challenge with the Marines, which Justine will be doing in his place. The event is an assault course designed by the military that involves fire and water.

“This is the first time I will be doing something like this in my whole life,” Justine told us, as she spoke about how Alex continues to inspire her to get out of her comfort zone.

“My diagnosis was Alex’s death, and this is how I relate to him. I find it really difficult to get out of bed every morning, but regardless of the pain, I have to keep moving. People living with this disease do that every day.”

In addition to the event, she continues to raise awareness of Parkinson’s:

“I am talking to anybody that will listen, putting on events and working with the charity, parkinsons.me. Alex died trying to be the voice of others, and now he is no longer here, it is up to us to carry on his mission for him.”

As well as raising funds and awareness through his physical challenges, Alex helped to set up the charity Spotlight Young Onset Parkinson’s Disease, and in 2014 was the first recipient of the Alex Flynn award from the Cure Parkinson’s Trust.

Two years later he received the Point of Light award, which recognises outstanding individuals, from the prime minister David Cameron.

You can show your support and further the research for Parkinson’s disease by donating to Parkinsons.me and sharing Alex and Justine’s story of hope, determination and love in the face of adversity.

mdgroup at SCOPE 2022: The Proper Selection of HCPs for Remote Patient Visits

Posted | February 28, 2022
Deploying appropriately trained, talented, and dedicated healthcare providers (HCPs) is essential to ensuring the quality and integrity of data collected during in-home patient visits. By selecting only HCPs who are…
SEO Manager
Love0