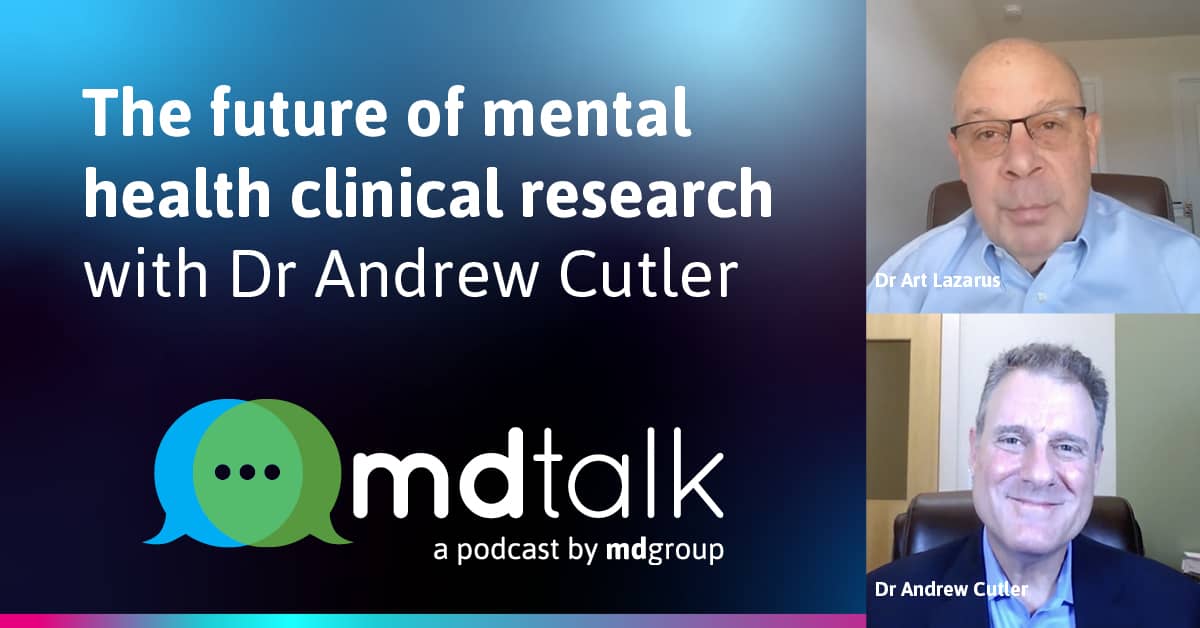 Welcome to episode five of mdtalk. Through this podcast and video series, we’re on a mission to highlight the most important issues impacting clinical research, the patient experience and the future of healthcare.

As well as watching the episode below, you can download the podcast or watch the video over on our Youtube channel here.

May is Mental Health Awareness Month, and in this episode, we will be shining a light on the future of clinical mental health research. Since the pandemic began, rising levels of mental health disorders have been recorded, highlighting the importance of clinical research and development like never before.

Dr Cutler has been conducting clinical research since 1993, and has been a Principal Investigator on over 400 clinical trials in a variety of Central Nervous System (CNS) and medical indications, focusing on ADHD, Bipolar Disorder, Depression and Schizophrenia in children, adolescents and adults. He was an Assistant Professor of Psychiatry at the University of Chicago before moving to Florida and founding Florida Clinical Research Center (FCRC) in 1998.

You can also listen to the podcast at:

Or search for us wherever you get your podcasts.

Dr Lazarus begins the episode by referencing three key takeouts from a recent psychiatrist-authored article and the Star D trial – a large study that was sponsored by the National Institute of Mental Health into the treatments of depression.

Dr Cutler discusses the Star D trial and each of these points in depth and concludes that the idea of staging depression, as suggested in point three, makes a lot of sense from a clinical perspective. Depression is a heterogeneous illness, and some people may respond differently to others following the same treatment path.

There is a huge cost hurdle involved in funding mental health trials, in part because the placebo rate is relatively high, and also because there is a longstanding stigma against mental health disorders and their treatment, Dr Lazarus suggests.

Dr Cutler discusses the changes to mental health trial funding over his career, noting “the biggest change we’re seeing now is this move towards smaller biotechs and private funding earlier on”.

Instead of big pharmaceutical companies investing in drug development from the start, they are either investing further down the line in smaller biotechs, or creating their own smaller divisions of their companies to act like a biotech, so that they have first rights to the drug if it shows promise later on.

How decentralised clinical trials are challenging the status quo

Dr Cutler describes his experience of the shift towards decentralised clinical trials, with more and more research sites able to target a wider geographic area to recruit a larger volume of patients. On top of this, there is a notable benefit for patients themselves in not having to travel or take time off to attend appointments.

Dr Lazarus agrees that the pandemic has “prompted the whole field of telehealth and specifically clinical trial research to be done more remotely than ever before.”

The development of newer non-drug therapies

Studies into difficult to treat patients with depressive disorders have led to a revolution in psychiatry, with newer non-drug therapies now being actively investigated and developed.

Dr Cutler shared details of a number of these therapies, which are currently in development, including:

The impact of these new treatments is described by Dr Cutler as a “new paradigm for thinking about how to treat people with depression and mental illness in general.”

The use of hallucinogens in treating mental health disorders

Despite the fact that hallucinogens have been used since the 1960s, Dr Cutler notes how scientists have rediscovered the power of psychedelics and how it appears hallucinogens can actually rewire parts of the brain.

Recently, studies into the use of hallucinogens and mental health disorders have shown that psychedelics may even lead to the formation of nerve cells that can be rapidly effective in treating mood disorders, including PTSD and some anxiety disorders.

A range of companies are now developing various forms of psychedelics based on drugs like LSD, amongst others, Dr Cutler shares. Some of these companies are even working on “second-generation psychedelics”, which reduce the hallucinogenic effects to become meaningful therapeutic drugs.

Dr Cutler and Dr Lazarus reflect on the raft of newer treatment options becoming available for mental health sufferers, with Dr Lazarus calling it “an explosion in psychiatry with newer cutting-edge treatments” in addition to the current medicated routes.

The future of mental health clinical trials: Not one size fits all

Dr Cutler speculates on the future of mental health trials. He thinks there will be growing interest in ketamine, which historically was used as an anaesthetic, but has now been shown to be an effective antidepressant. A newer form of ketamine called S-ketamine has been approved by the FDA, and is the only form of ketamine currently available to treat depression.

Over the years, research has demonstrated patients with depression and other mental illnesses are not homogenous. Dr Lazarus explains, “when you think about the underlying neuro mechanisms for neurotransmitters involved in depression and other psychiatric disorders, it makes sense that we have a wide array of treatment mechanisms that we use to treat them”.

The impact of the pandemic on clinical trials for mental health

Dr Lazarus notes that for years there has been stigma around those dealing with mental ill health, which has impacted research into mental health in general. Following the pandemic, people are actively seeking out treatment options and discussing their mental health more openly, and with less shame.

Clinical trials have also been pushed into public awareness like never before, with the pandemic going some way to educate the public about the importance of clinical research and what is involved in the process.  As a result, we’re seeing more people volunteer to take part and respond to newly-styled recruitment drives through social media.

Finally, Dr Lazarus shares that the definition of research goals and objectives has also evolved since the pandemic. Instead of focusing on symptom reduction as a treatment goal, scientists are now going beyond just treatment to take into consideration wellness, resilience and other functional measures and quality of life. This patient-focused approach is welcomed all round.

Posted | May 12, 2022
Welcome to episode six of mdtalk. Through this podcast and video series, we’re on a mission to highlight the most important issues impacting clinical research, the patient experience and the…
SEO Manager
Love0
mdtalkNews

Introducing the mdtalk podcast: bringing you the best in clinical research discussions straight to your device

Posted | March 17, 2022
We are delighted to announce the launch of the mdtalk podcast. Join host LaQuinta Jernigan, Executive Vice President for North America at mdgroup, as she shines a light on the…
SEO Manager
Love0
mdtalkPatient CentricityPatient EngagementPatient ExperienceTechnology

Facilitating Remarkable in 2021 and Beyond