By SEO ManagerFebruary 25, 2022No Comments 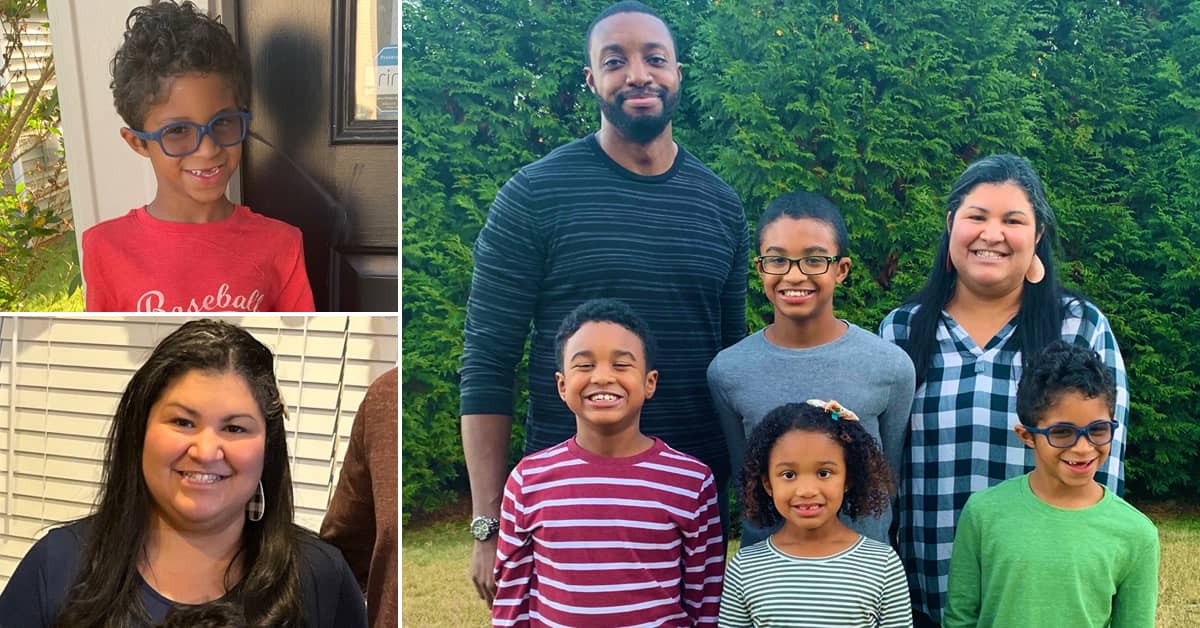 Jennifer Kinnebrew is a Contract Administrator at mdgroup, based in North Carolina. As part of her role, Jennifer assists in ensuring contracts with our clients and suppliers are in place so trials can start promptly, and run smoothly.

For Rare Disease Day 2022, we spoke to Jennifer about her six year old son, Nathan. Nathan has a rare condition that affects his sight, so we were interested to hear how he received his diagnosis and the wider impact of living with a rare disease on the rest of the family.

Jennifer also shared her experiences of raising awareness around rare diseases, and how important it is to increase accessibility to rare disease clinical trials around the world.

Hi Jennifer, thank you for joining us. Could you tell us about Nathan’s condition and when he was diagnosed?

My son Nathan was born with extra digits, but at the time no one thought anything of it and we were led to believe it was just one of those things that happens. But when he was four weeks old we began to notice that his eyes weren’t focusing properly, and moved rapidly, especially when he was upset. We’d already had two children and knew this wasn’t normal.

At Nathan’s six-week check, the doctor diagnosed him with Congenital Nystagmus – an involuntary rapid eye movement. We were told though that sometimes nystagmus can be a symptom of something else going on, either minor or major, so we were referred to the paediatric ophthalmologist to find out.

It was the ophthalmologist that diagnosed Nathan with having Bilateral Optic Nerve Colobomas, or holes, in his eyes. The holes can appear anywhere, but for Nathan the holes are on his optic nerve, with one eye more affected than the other. It occurs congenitally when the optic nerve is incompletely formed as the foetus develops.

How has the diagnosis affected Nathan’s development and what support have you found?

As one eye is more affected than the other, Nathan has less sight on one side. At first we weren’t sure how much he could see and what his quality of life might be. The only thing we comforted ourselves with, was that it wasn’t progressive. From the minute he was born he was the way he was – and that was our glass-half-full way of looking at it.

The risk is that his condition makes him much more susceptible to full retinal detachment, or problems with his optic nerve, both of which would result in Nathan losing all of his vision.

Because of this risk, Nathan has been monitored and treated by Duke University’s Eye Center since he was four months old, which we’re very grateful for.

Duke’s team also discovered that other parts of Nathan’s eye didn’t develop properly in utero, and he was subsequently diagnosed with Foveal Hypoplasia, which can affect his ability to see fine details. Between that, the nystagmus, strabismus and the colobomas, Nathan has a lot of things going on – but he’s doing great.

For the most part, if you saw him running around you wouldn’t be able to tell that he isn’t a normal six year old. We’ve been really thankful that he’s been able to do most things that other kids can do, despite being a little slower on the developmental track.

“We’ve always celebrated Nathan, and all the kids like him, because we know how rare these conditions are.”

There is no genetic reason why Nathan has these challenges – it was just a random twist of fate. Instead, we feel fortunate that he has the sight that he does.

Why is it important for you and Nathan to raise awareness about Rare Disease Day?

Rare Disease Day is such a great way to raise awareness around conditions such as Nathan’s that people largely aren’t even aware of. Every year I take it upon myself to educate people about the day in general, but also on Nathan’s specific condition so that people have more of an understanding of the challenges he faces.

My hope is that by raising awareness, there can be more of a focus on research for these lesser-known conditions.

“Sometimes you feel left out because other diseases are higher profile, and have all kinds of research going on to help sufferers. You kind of feel forgotten.”

When you have a rare condition or disease, you’re part of a very small minority. Others can’t see the value in helping just a handful of people. To me, that’s the point of Rare Disease Day. It’s to stand up and be counted, and not to be forgotten or ignored, whilst pushing for more research for everyone.

mdgroup specialises in helping patients with a rare disease to find and take part in clinical research. What does that mean to you?

It means a lot. Just having someone in your corner, to make sure the patient and the family are comfortable and supported, can make all the difference. For me working for mdgroup, I want to make sure that patients are taken care of, because I understand how it feels to be in their shoes.

When Nathan was diagnosed we went through a lot as a family, with my other children also being subjected to tests to try and establish any genetic factors. We were all poked and prodded.

“Taking part in a clinical trial is not just about helping the patient, it’s about helping everyone that went before, and will come after, them.”

After my own experiences, I understand how important it is for the families of our trial patients to be comfortable with the process, and supported through it.

Finally, what more do you think could be done to raise awareness of rare diseases?

I’d love to see more events taking place to raise awareness, even in small communities. Local events would bring people together, and help others not only understand about rare diseases, but how many people are affected by them.

“When I found out about Nathan, I felt like I was alone. But after putting myself out there, I realised there are so many more people with various, if not similar, diseases. And all of these people were almost within arm’s reach, but we just didn’t know about each other.”

Nathan may be a little different, but he’s still just a normal boy. Everyone has their own normal.

Find out how we’re delivering remarkable for patients taking part in rare disease clinical trials. Get in touch today.

Posted | September 28, 2022
Welcome to episode eight of mdtalk. Through this podcast and video series, we’re on a mission to highlight the most important issues impacting clinical research, the patient experience and the…
SEO Manager
Love0