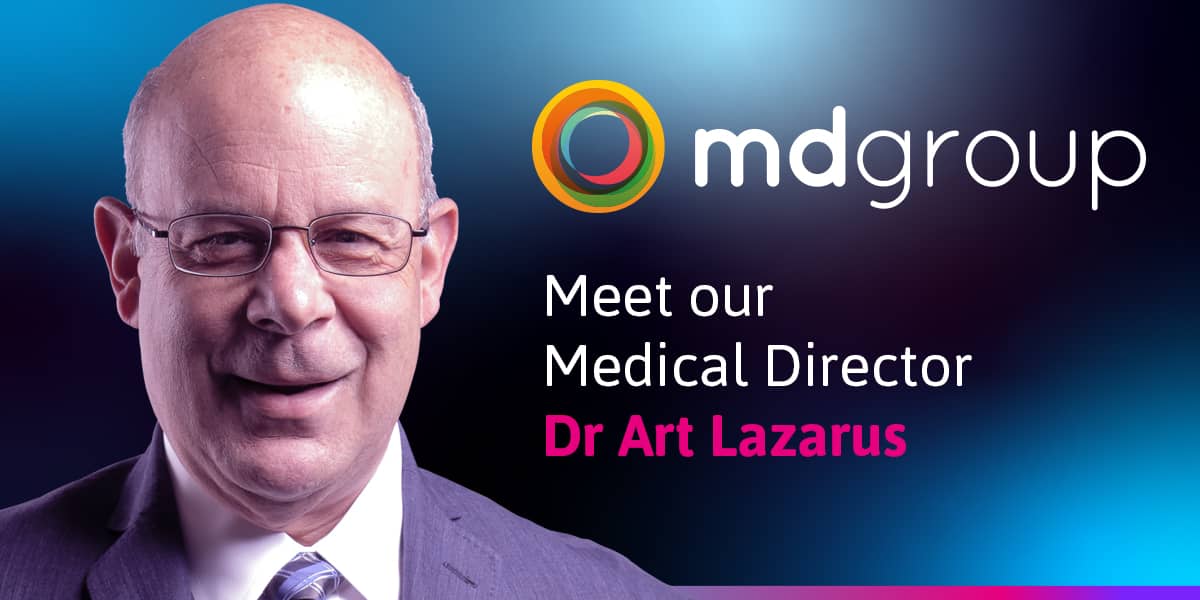 Dr Arthur Lazarus joined mdgroup as Medical Director in July 2021. After practising as a psychiatrist delivering one-to-one care for 20 years, he became interested in population health care and global impact, which led him first to a career in health insurance and then to the pharmaceutical industry.

Dr Lazarus has been referred to as a ‘double agent’ – working for large corporations while simultaneously advocating for patients, helping them overcome barriers and access better treatments.

He has a background in clinical development, patient safety, and medical marketing and brings a wealth of experience to the mdfamily. We spoke to him about his past career, his role at mdgroup, and why he’s passionate about promoting true patient-centricity.

I’ve always been an advocate for patients. When I worked in health insurance, people told me I’d gone to “the dark side” but I never saw it that way. Instead, I found ways to get patients the services they needed and overcome bureaucratic barriers.

Being called a ‘double agent’ was the best compliment I ever received from a fellow physician. He wanted more time in hospital for his patient, and I helped him get it even though the insurance company wasn’t keen to allow it. Most doctors would have denied the care – and I knew that wasn’t the right thing to do.

I left the health insurance industry because too much of it was about denying services, micromanaging, and not getting patients the full and proper treatment they needed. That’s when I gravitated to the pharmaceutical industry, to help patients in an entirely different way.

What does your role at mdgroup involve?

I’m involved in business development, site engagement and protocol feasibility. Right now, I’m looking at expanding our mobile health services and the people we need to do that.

I make sure protocols are scientifically sound, look at the inclusion and exclusion criteria, and look at the requirements of physical exams and how specific they need to be. For example, a nurse can perform a routine physical exam but a complicated protocol might require more detailed examination which your typical registered nurse isn’t trained to do. That makes a big difference in terms of resource allocation and planning.

I’m also involved in site engagement. At mdgroup we’re the interface between multiple parties involved in a clinical trial – sponsors, CROs, sites, home health and patients. I make sure we’re known to clinical sites, that they trust us to perform the mobile health component to the highest standards, and that they can count on us to meet their requirements.

Physicians often don’t get involved in operations, but I enjoy it – and sometimes it’s necessary. For example, I’m speaking to a physician about whether a nurse performing home health visits needs to carry an EpiPen. I was concerned there could be an anaphylactic reaction to the investigational product, and we got pushback from the sponsor because they didn’t feel it was necessary. I help iron out these kinds of issues.

What do you think makes mdgroup different?

Heart goes into everything we do. I felt the warmth, caring and concern for employees, patients, and clients immediately. In part, I attribute that to the fact mdgroup was founded by a woman and most employees are women. The culture is refreshingly different, as virtually every corporation I’ve worked for has been run by older white men.

I also admire how the company has reinvented itself. To have grown from a travel concierge business to having a core pharmaceutical competency, hiring exactly the right people in the areas needed to evolve the business, and to see such dramatic growth – that’s remarkable.

How does your role support mdgroup to deliver remarkable patient experiences?

I bring out the best in people by thinking about areas most people won’t consider. We all have blind spots, and if we put all our blind spots together it creates a synergistic effect.

Working with the team here, I’ve heard and seen things I’d never have thought about. And vice versa, I flag things others haven’t thought about which could potentially complicate an operation or be problematic. Together, we help each other be the best we can be.

The care and thought mdgroup puts into hiring people is a huge factor in making us remarkable. The overarching philosophy is that if you start with excellence, you produce excellence. If you hire the best people, you’ll end up with great results.

What do you think about the accelerated move towards decentralized clinical trials in the wake of COVID-19?

It’s a brilliant move. We’re still encountering resistance though, as the prevalent thinking is still old-fashioned. In many ways, at least in the US, that thinking is mirrored in healthcare delivery. We’re saying we want a patient-centric approach, yet the reality is most healthcare still requires the patient to come to a clinic, academic university, or private practice. It doesn’t revolve around the patient – it revolves around healthcare providers.

Most clinical trials are the same, and we’re trying to break that mould. I’m here because I want to be part of any opportunity to change people’s viewpoints and way of thinking, so they think about home health care as an option in more situations.

Why are you so passionate about patient-centric care?

Ultimately, it’s all about the patients. They’re the benefactors once an investigational product is approved by FDA or other regulatory authorities. We’re starting to see that reflected in television commercials in the US – they thank the trial sites, investigators and patients who participated in the trial to bring this drug to market.

Patients are starting to get the recognition they deserve. They’re heroes because they’re testing products before they’re approved for marketing and distribution. That’s bravery. That’s courage. We should always come back to that recognition.

Posted | November 22, 2022
We’re proud of every individual in our global mdgroup team. Not only are they wonderful to work with, but their drive to create remarkable patient experiences and make life better…
SEO Manager
Love0