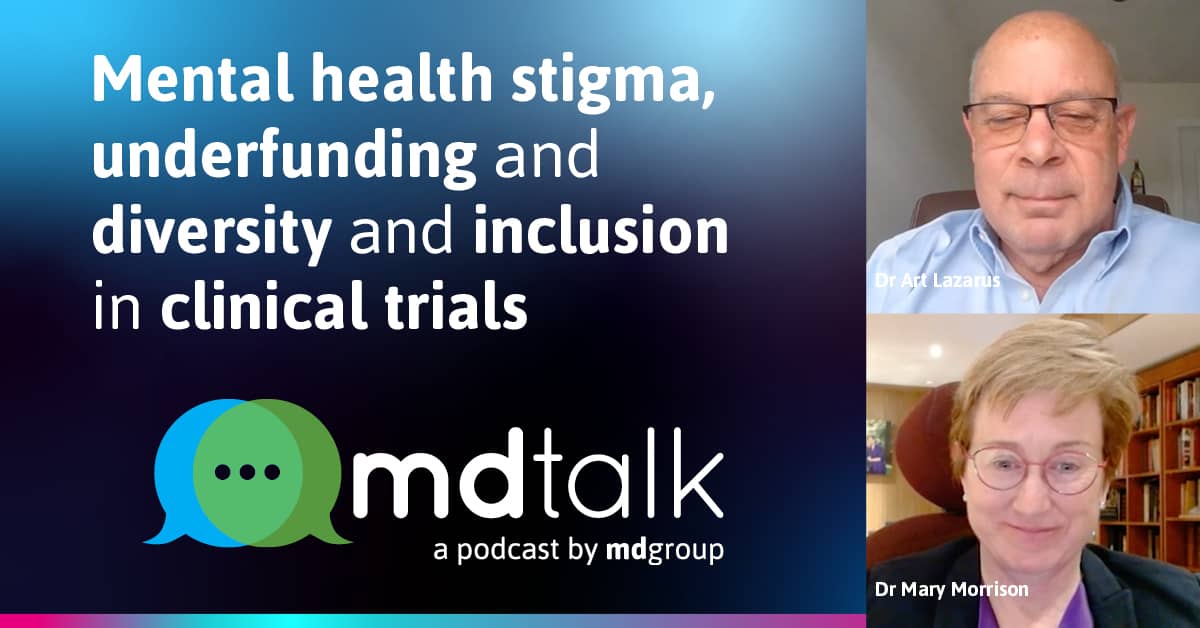 Welcome to episode six of mdtalk. Through this podcast and video series, we’re on a mission to highlight the most important issues impacting clinical research, the patient experience and the future of healthcare.

As well as watching the episode below, you can download the podcast or watch the video over on our Youtube channel here.

To mark Mental Health Awareness month this May, we’re focusing on breaking down barriers and stigma in this important conversation between mdgroup’s Medical Director, Dr Art Lazarus and Dr Mary Morrison.

Dr Morrison is a Professor of Psychiatry at the Lewis Katz School of Medicine at Temple University in Philadelphia, Pennsylvania. She is also a member of the Psychopharmacology Task Force for the National Institute of Mental Health (NIMH) and is currently researching treatments for substance use disorders.

The cohort was predominantly impoverished black and Hispanic individuals. The study revealed that black individuals often said that they were frightened of being experimented on – they don’t trust doctors because doctors don’t seem to relate to them.

Respondents also felt more comfortable in their native language where they could express themselves better, which in turn makes them feel more comfortable in the informed consent process. The study also found having the ability to speak to somebody who is from your community who’s gone through a clinical trial, and can tell them about what the experience of being a subject of a trial is like, is really important.

Dr Lazarus draws parallels between the recruitment of minority groups into clinical trials, and the hesitancy around vaccination in the era of COVID. People from marginalised communities  are less likely to trust caregivers who they don’t identify with, which is exacerbated by the fact  the medical industry in the US is largely lacking in racial and cultural representation. There has been a change in the recruiting efforts of medical schools over the years to improve diversity and accessibility, but more still needs to be  done.

Dr Morisson considers the causes of mental health stigma and its impact on a patient’s access to treatment. She surmises that psychiatry and mental health are two separate parts of the medical system, and not integrated together. The result is a lot of gaps in care, particularly for people who have combined medical and psychiatric illness. Addiction too has its own challenges in the medical system, and is considered even more remote from conventional medical care than mental health.

As an example, Dr Morrison refers to the process of methadone treatment in the US which requires users to visit “secret” places to pick up their medication. Dr Morrison suggests this is a reflection of how society treats mental health care – as something shameful to be hidden away.

Even professionals like doctors face the stigma of mental health – they would rather go without treatment, or receive treatment in secret, than to declare it to their insurers. Dr Lazarus suggests that, despite the fact we’re finally recognising the issues surrounding burnout and the toll the pandemic has taken on physicians, fear is still the number one reason why medical practitioners are reluctant to seek help. Physicians are required to answer questions around mental health on licensing applications, and fear losing their licences if they speak out.

Diversity and inclusion in clinical trials

Dr Morrison outlines why diversity in clinical trials is so critical. Firstly, because it is important to study the disease or disorder under investigation in patients who actually have it. Only by doing so can we have confidence in new medications and results. In one example, Dr Morrison shares that when drugs were primarily tested on men, women had adverse effects that weren’t picked up in the male studies.

Secondly, people have more confidence in new medications when they can identify with other participants taking part in clinical trials. When you have a more diverse population, you can pick up both beneficial effects for certain populations as well as unique adverse effects, which is a crucially important role of testing. This is also true in the study of psychiatry where psychiatric drugs are metabolised by people of different cultures, race,and ethnicity, very differently.

Only by including a wider representation of the population can medications be made safer, and only then can we achieve health equity.

The future of mental health and substance use disorders research

Dr Morrison considers the future of research of substance use disorders, and notes that the path for medical trainees to specialise in clinical research is limited by difficult routes through university channels (often at the expense and dedication of students), and dwindling investment from pharmaceutical companies into psychiatric drugs.

There has been some investment into drugs for opiate use disorder, but despite the fact that depression is the number two cause of disability in the world, there still isn’t the clinical research pipeline to help with addiction or major mental disorders.

Dr Morisson speculates that “funding does respond to pressure”, as illustrated by the  high levels of funding for opiate use disorders because of the escalating risk of drug overdose deaths. The increase in these deaths is because  heroin and other opiates are being cut with fentanyl, a synthetic, much stronger drug. Fentanyl is also now appearing in cocaine and methamphetamine, which is disproportionately killing black Americans with cocaine abuse disorders.  Unfortunately, whilst the overdose death rate has levelled off for white Americans, it’s still escalating for black Americans and the funding hasn’t yet followed.

Dr Lazarus summarises by saying progress is being made in the treatment of mental health and drug use disorders, but it still has a very long way to go to be considered as important as cancer or cardiovascular disease that don’t have the same level of stigma attached.

Posted | May 1, 2022
Welcome to episode five of mdtalk. Through this podcast and video series, we’re on a mission to highlight the most important issues impacting clinical research, the patient experience and the…
SEO Manager
Love0
mdtalkNews

Introducing the mdtalk podcast: bringing you the best in clinical research discussions straight to your device

Posted | March 17, 2022
We are delighted to announce the launch of the mdtalk podcast. Join host LaQuinta Jernigan, Executive Vice President for North America at mdgroup, as she shines a light on the…
SEO Manager
Love0
mdtalkPatient CentricityPatient EngagementPatient ExperienceTechnology

Facilitating Remarkable in 2021 and Beyond